I have this distinct memory of grocery shopping with my sister shortly after returning from Guatemala. We walked through the produce department, where tomatoes were $0.99 a pound. My sister thought that was a good price, and suggested we buy them. “What?! 99 cents a pound?! Are you crazy? That’s almost 10Q a pound, and I can get them from the woman at the corner stall for 2Q.” [Note: Q = Quetzal, the currency in Guatemala, at that time roughly 8Q = $1]. I didn’t buy the tomatoes. We moved on. Onions were too expensive, because I could get them 2 pounds for 1Q at my favorite vendor. Carrots, apples, and pretty much everything I wanted to buy was the same; outrageous “gringo” prices. um, yeah, gringo prices, since gringos would pay a lot more in the markets in Guatemala since the expensive prices were still less than what they would pay at home!

Adjusting to what I considered to be the outrageous prices on produce in the US, in comparison with the incredible prices I had seen all over Central America was really difficult for me. And yes, I look forward to seeing great prices again when we move. But for now, I’m in the US, and I am simply never going to find tomatoes for 20 cents a pound!

While we’ve started growing a few (very few!) of our own veggies, we don’t produce nearly enough for our needs, so I’m constantly looking for fresh veggies at good prices. When I lived in California, I was part of a CSA, but where we are in Texas, we have not been able to find a CSA in our area with pick-up days/times that work for us. Instead, we’ve found a veggie co-op that buys in bulk from the local farmers market every two weeks.

This co-op is run by a woman in my sisters’ homeschool group, and most of the members are also members of that group. In an effort to save on cost, everybody contributes $30 every 2 weeks, and one or two people in the group do the shopping every time, then come back to the organizer’s house and split the goods: 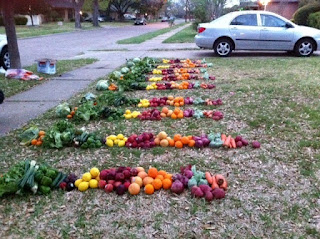 At 8 am (yes, that means that the veggie buyers have to hit the market before the crack of dawn!), the rest of the members of the co-op arrive, pack their veggies into their boxes, pay for their portion coming in 2 weeks, and head home to enjoy the bounty.

When we first started this, we shared a portion with my sister, but we found that it was more veggies than we would sometimes eat before they were going bad, and we hated for them to go to waste. Now we share our half with another sister, and we end up having to buy a little more, but we prefer that over wasting food.

This week, this is what our quarter portion looked like: 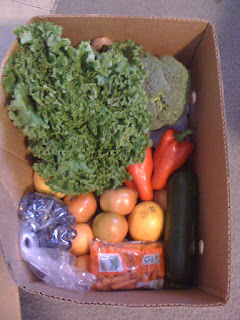 Once it was all laid out and grouped together, it looked like this: 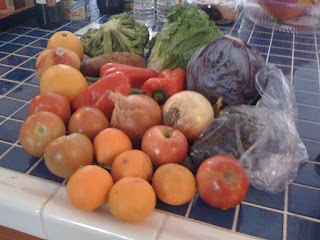 For $7.50, I think that’s a pretty good deal! I’m trying not to imagine how much better it would be in El Salvador! I admit, though, that I’m intensely curious as to how much this would cost me at the local grocery store – I think I may have to do a little cost comparison later today!

3 thoughts on “Our Veggie Co-op”