As P-Daddy will happily tell you, we have way too much stuff! Our garage and extra bedroom have all kinds of things piled, stuffed, and gathering dust. Here’s a peek at what it looks like: 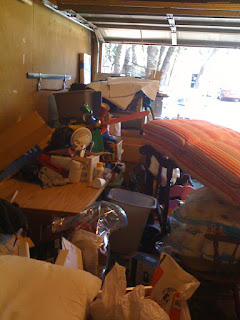 There are a couple of reasons for this, the first being that we combined two entire households and moved to Texas in a bit of a rush, so we didn’t sort through everything when we moved. It was easier to just pack everything up and plan to sort through it later. Well, three years later, we still have boxes that we have not opened a single time since we moved.

A second reason why we have too much stuff is that both P-Daddy and I are pretty dedicated to the reduce-reuse-recycle philosophy. You would think that this mindset would translate to less stuff, but neither of us throw things out willingly if there’s still some use left in them. So while this is good in theory, it has added to the piles of stuff hanging out in the great abyss of the garage. No worries, we are not changing this philosophy, we just want to be able to get to those items to be able to use them.

Needless to say, before we can run for the border we need to deal with all this stuff. Plus, even while we live here before we go, we still need to sort, organize, donate, and sell. So this week, my goal is garage organization, which is just one step closer to heading for the border. Thinking of getting organized out there was made easy by a sale at our local Aldi store. 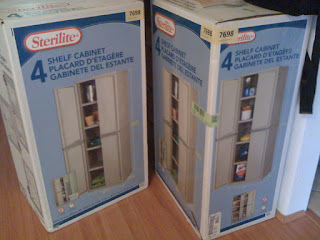 These units had been around $80 (same price as other stores around town), but had been marked down to $50. We bought 1 at first just to see how difficult they’d be to put together, but it was super easy, so we went back and got 2 more. You start with this: 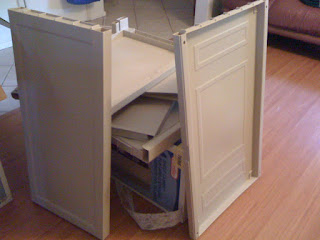 And before too long, you have this: 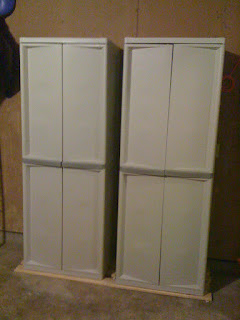 One of these cabinets we are using for food storage (we’ll talk about stockpiling in another post). 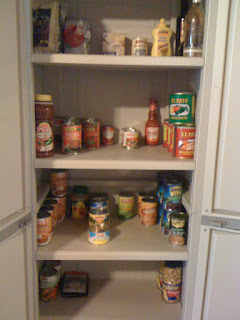 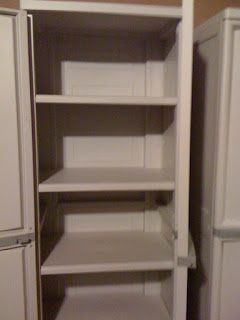